As a child, Kay Moore rode a bus with her grandmother to go shopping in downtown Gadsden, Alabama. Christmas brought trips with her mother and sister to buy presents from businesses offering great deals for the Yuletide season.

Then the boom times went bust. A modern mall opened not too far away. “And this,” Moore said, sweeping her hands toward the modern business district, “became a ghost town.”

Now, the ghost town is history. A Main Street Alabama community, downtown Gadsden has seen occupancy rise from about 60 percent to 92 percent in recent years. New brick-and-mortar businesses arrive with regularity and people follow – to shop, to eat and to savor the atmosphere, especially on First Fridays, a monthly celebration that draws thousands of visitors.

Since its beginnings in 2009, the nonprofit Main Street Alabama has focused on reclaiming the economic health of downtowns in 23 small cities and large towns across the state.

In Gadsden alone, Main Street Alabama has boosted investments – $98,316 in public dollars coupled with $1.8 million in private money since 2014 – to create jobs and restore the character of business centers.

“When I first came here, the entire downtown was empty,” said Anna Heard, the owner of Jireh’s Boutique & Gifts. “There were no other boutiques, no gift shops – not even a coffee shop. It was abandoned.”

A Gadsden native, Heard found a storefront and set up shop, then expanded into what used to be the Snell Grove Drug Store. “We used to get our schoolbooks here,” Heard said. “It was the place for everyone in Etowah County.” 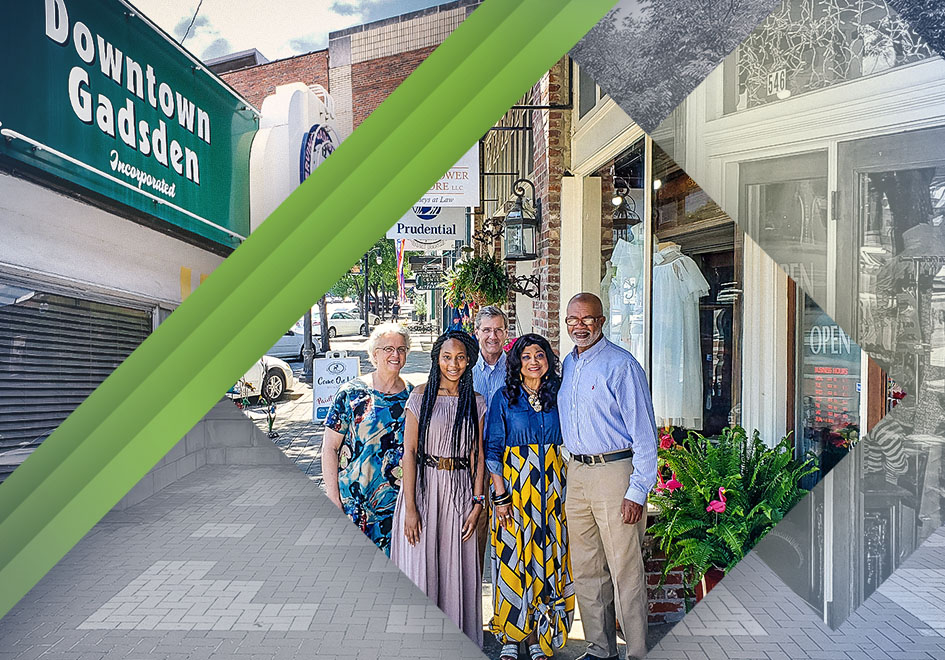 Jireh’s Boutique and Gifts is one of Downtown Gadsden’s oldest success stories. Owner Anna Heard (second from right) is joined outside the store by Kay Moore, Kirsten Tuck, Paul Carruthers and Earl Heard.

On a typical muggy summer day, early morning traffic – parking is free out front – lures a steady stream of customers, keeping Heard, her husband Earl and store manager Kirsten Tuck busy. “Honestly, I never thought it would grow into this,” added Heard, who was named the 2015 Alabama State Retailer of the Year.

“Regions is not just a financial supporter of Downtown Gadsden,” Moore said. “In fact, Wilbur is the most patient person I know. Every First Friday, you have these classic cars come in and take up all of his parking spots at the bank. He never complains. From our perspective, it means you have a partner here who is willing to work with you financially, physically and emotionally.”

“I grew up in Gadsden during the 1970s, when downtown was flourishing,” Masters said. “After many businesses relocated, it took a while for downtown to rediscover its identity. Today’s activity is very similar to the best days of the past. Our downtown is safe, friendly and inviting due to the efforts of the local merchants, city leadership and our MainStreet Program, Downtown Gadsden, Inc.”

Elliott Propes, the Area Director for Young Life in Gadsden, just moved into a business-district loft because of the vibe. “Just to be able to walk downtown, to eat downtown, to live downtown, there’s something really good going on here,” Propes said.

I love downtown, and it has been fun seeing it come back to life. We have events, we have shoppers, we have everything.
Tena King, Founder of King’s Olive Oil

Tena King believed in Gadsden long before she established King’s Olive Oil. A former Chamber and United Way president, King devised a business plan over a weekend after she learned about the benefits of cooking with virgin olive oil to help her mother recover after a liver transplant.

Founded in 2013, King’s Olive Oil offers an “interactive and educational tasting experience unlike any other.” The selection of oil and vinegar flavors come from across the globe. 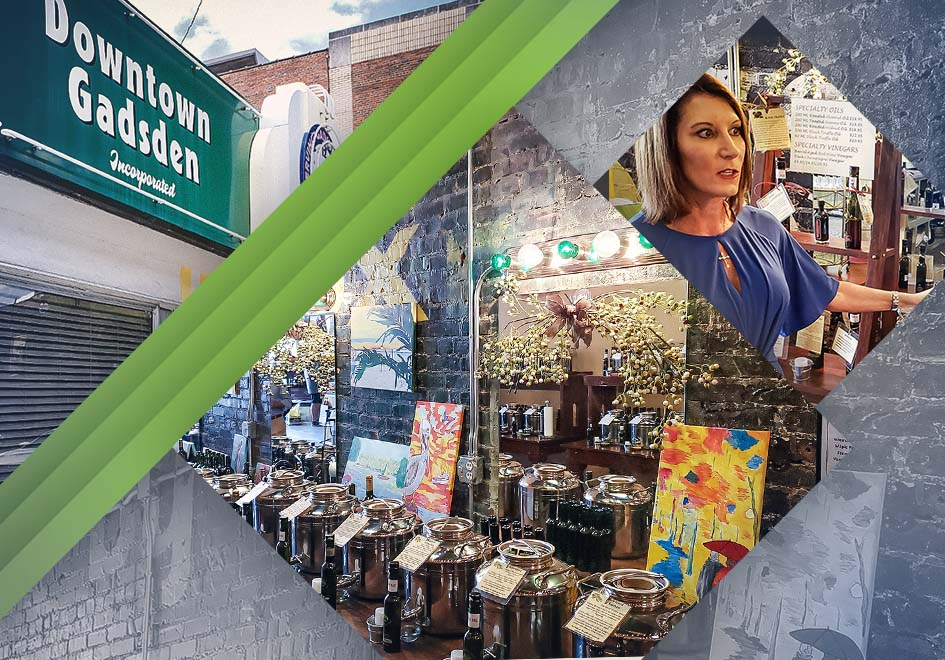 “I’m a big fan of Main Street Alabama,” King said. “I love downtown, and it has been fun seeing it come back to life. Ours is alive. We have events, we have shoppers, we have everything.”

And it has Kay Moore. “If she wants something done, it gets done,” King added. “We wouldn’t be here without her.”

Jason Wilson gave up an international posting as a supply chain analyst to come home, to Gadsden, where he founded Back Forty Beer, a fast-growing brewery with a national reputation.

“I’m a fifth-generation Gadstonian,” Wilson explained. “I’ve got so many connections here, yet when I graduated high school I was never, ever coming back.”

A job in Atlanta and international travel awaited him after graduating from Auburn. Even when a lucrative job overseas beckoned, something kept calling him home. 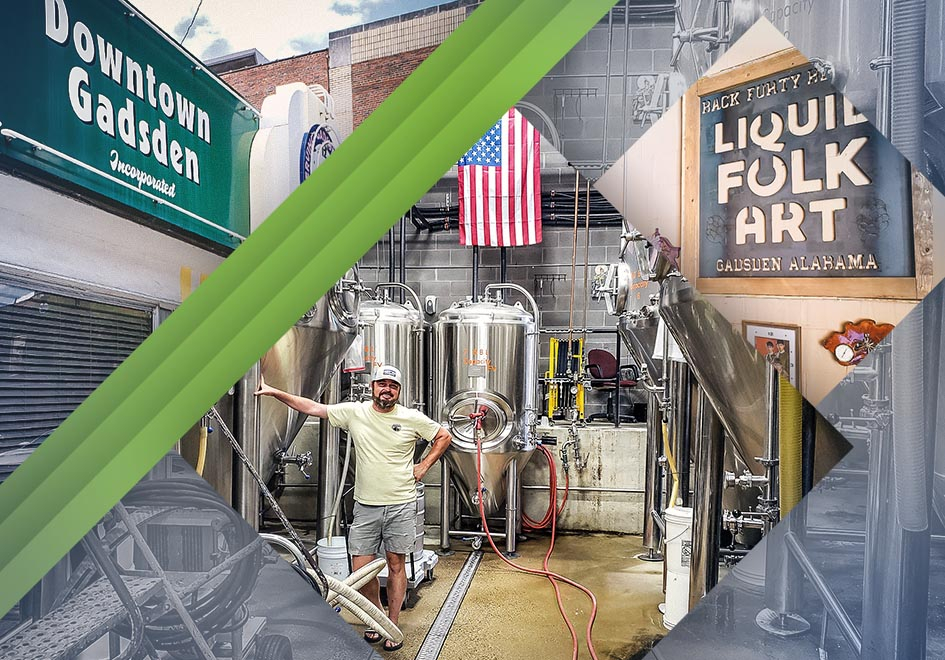 Jason Wilson founded Back Forty Beer in his hometown and since has grown it into a nationally respected brand.

“You come back and visit Gadsden, you see the storefronts pop up and see the revitalization and you want to be a part of it. I knew if I came back, I’d make an impact,” he said.

Wilson believes the timing of the downtown resurgence and Main Street Alabama’s 2009 emergence were more than fortuitous.

“I think the economic recession was the single-best thing to happen to Gadsden and other small cities in Alabama,” Wilson said. “What happens when you lose your job? You come home. As a result, we ended up with all these entrepreneurs here, and it recharged everything.”

The buzz isn’t limited to newcomers or people who recently returned. Up the street, work is underway along an entire block owned by Life Insurance Company of Alabama, which has been in business since 1952. Now, the company is restoring a series of adjacent buildings to their original glory. The change, locals say, is dramatic.

“We moved into this building in 1960, when we outgrew our original one,” said Clarence Daugette, the CEO of Life Insurance Company of Alabama. “We felt it was time for Life of Alabama to take it back to where it was, because we are here to stay.”

Our Main Streets tell us who we are, who we were and how the past has shaped us.